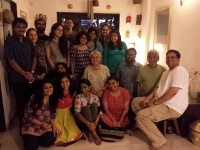 In a campus that is fueled by animated discussions and debates, a group of students are conspicuous by their out-of-the-ordinary presence. Armed with cameras and tripod stands along with a microphone in tow, this cluster is often met with glares and/or bewildered smiles as they fix their shots near the library stairs, behind the canteen walls or outside the convention hall. It is through the projector, when all the captured and edited footage is displayed on the screen at film festivals in India and around the globe – perplexity gives way to honour and pride for the entire institute.

Welcome to SMCS, a sanctuary for those who intend to look at and set foot in the media with more critical understanding and well-honed skills.

It is at SMCS that you will come across a computer engineer studying Marxian theories, a literature graduate editing hour-long footage and making sense of it all, and a fashion designer deconstructing nationhood and post-colonialism. One wouldn’t need to look a certain way, speak a certain language or hail from a certain background to belong and thrive here.

Besides playing host to two of the biggest annual student events in the country- Cut.In Film Festival and Frames Of Reference- and discussions in and out of the classroom with professors, media professionals and scholars in residence alike, SMCS helps harbour wavering student imaginings.

The words “research dissertation”, “Footnotes” and “graduate film” that are heard in varying decibels during the last three months of the course, echo not just the students’ anxiety to meet deadlines, but also their contribution to the school’s glorious heirloom of awards and recognitions.

For someone, who had so far, only ideated in words, the setup at SMCS has helped me look at the everyday in the form of frames and shots.

Honestly speaking, the initial elation and relief at making the cut for the Media and Cultural Studies course at TISS soon gave way to anxiety. It seems laughable now, but the prospect of traveling back and forth everyday from Mumbai Central (where I live) to TISS seemed daunting then. How quickly did such considerations pale into insignificance as I immersed myself in the life at TISS and, more specifically, at the School of Media and Cultural Studies.

Amidst all the countless frantic hours writing assignments, shooting footage, editing sequences until our eyes rolled over, watching and discussing films and film lore, research paper readings, conferences, if there is one thing my time here has taught me, it is to look at things with a critical eye, whether it is on the page, on screen or in real life. I became acquainted with, to use the parlance of our department, various “ways of seeing” – an ambiguous term, it seemed at first, of too slight an import. At the end of two years, I know that its importance can hardly be overstated. Another aspect that struck me about life here is how blindingly fast it has carried us and passed us by. And yet, as we lived them, the days often seemed interminable, tiring and ill-equipped to contain the massive amounts of work. But never was there a single moment of dullness. The sense of frenetic activity, curricular and extra-curricular, consumed us all. So much so, that at the end of it all, we were left with a sudden feeling of emptiness as we hit the ground running. I think I’ve left a bit of myself in the corridors of our department, in Room no. 4 (our default classroom) and the editing suite, for good.

Looking back at the one year that has gone by, I can’t help but think of what Forrest Gump’s mother used to say to him – “Life was like a box of chocolates. You never know what you’re gonna get.” (I must confess I have never got a bad chocolate from a real chocolate box though I secretly keep believing that I will one day get the earwax flavoured one like Dumbledore).

Yes, the year has been a mixed bag. Though it wasn’t Eastwoodishly good bad and ugly, there were the highs and the occasional lows.

Life at MCS? Hmm, now that I am already past the over-used Forrest Gumpquote, I should talk about some of the most memorable moments of the past year. Please note, this is the perspective of an engineer who walked into the world of social science like “Shanghai” Jackie Chan in the Wild West (meaning I was clueless, not a martial arts expert).

There were some insanely scary moments, like the first time I heard the word ‘hegemony’ (though by end of that class, I had heard the word enough number of times to marry it for life). But mostly, life here has been fun and deeply enriching. Every day is filled with activities at TISS. Seminars, workshops, classes… the list is endless. But what I enjoy the most about the course is the symbiotic relationship it shares with the city. I remember how as an outsider, Mumbai city was Bollywood, Marine drive, Vada Pav, Fiat taxis and busy trains.

But today, thanks to the course, I know the city a lot more. The city with its complexities, has been the muse for many documentaries made by the faculty and students. Naata, for example, was an eye-opener for someone like me, who previously knew Dharavi only through Slumdog Millionaire and the umpteen Malayalam movies where the ‘villain’ness of a character was often measured by their connection with the place.

Furthermore, the Image Making course forced us to observe and understand spaces. Video production made us crawl through small lanes and busy markets for the perfect photograph. The journalism course offered an opportunity to understand communities hidden in this vast city.

And I hear from the seniors, that the journey has only began. So I can’t wait for the semesters to begin. To resume life, the morning rush to make it for the class, Anna’s chai on extended breaks, local train rides to unheard-of locations, late night library chats and early morning Poha at Chembur station.

When you study at SMCS, you realise that you are a student, researcher, photographer, filmmaker, journalist, philosopher and teacher, all at the same time. One can explore his/her own areas of interest and also be in sync with what the course seeks to offer. How else can I explain my dissertation topic ‘Photography, Software, Memory’ within the ambit of Media and Cultural Studies?

In many ways, SMCS is home. The faculty and staff, with their vast experience, ensure that we never feel out of place and that we get to do the kind of work we want to. Also, being a part of SMCS has placed me amidst a diverse group of peers to interact with, agree, disagree, debate and learn from. Though the semesters are loaded with readings and assignments, there are spaces to stretch out and relax from time to time, with movies and talks. Anyone who comes to SMCS can only leave with enhanced knowledge, wisdom and memories for life.

Life at SMCS tends to centre around one corridor, where student classrooms, a production studio, and faculty offices are lined in a row. This becomes a liminal space where faculty and students can mingle freely, but without intruding on each other, ensuring greater accessibility when required. As the semesters progress, one spends less time behind desks and more behind cameras and out on the field, working towards projects and racing to beat deadlines. When all else is frenzied around you, the SMCS corridor provides a space of familiar stability. Also convenient is the water cooler at one end, and around the corner the quadrangle, which doubles and triples as an impromptu conference hall, complete with charging points for cameras (provided by the school) and other electronic equipment like laptops (not provided by the school).

In describing the space, one also describes the course itself. It is rarely less than frenetic, but there will always be time to breathe. As a student, one tends to rush around like a dingbat, but the work is always fulfilling, and you leave the course with an oeuvre you can be glad to show to friends and prospective employers. Life at SMCS would continue without its corridor, and perhaps in an even more satisfying manner, but in this time and this place, it is a fine place to be.

It’s hard to describe a typical SMCS student, given the incredible diversity of the cohort every year. Students come from across India and sometimes, even across the world. They tend to come from varied backgrounds, ranging from engineering to pharmaceutical sciences, from literature to sociology, from mass media to linguistics. This ensures an exhilarating classroom experience, with tremendous scope for learning from one’s peers. TISS’ focus on social justice and its robust financial aid program makes this educational opportunity available to all students irrespective of gender, caste, class or economic status, allowing for a richer set of perspectives and experiences that are then shared and understood.

Throughout the year, the campus is bustling with after-class activities such as talks, discussions, debates, book readings, film screenings and cultural performances. SMCS, for instance, runs a weekly film club called Adda and an arts & culture forum called Culture Cafe. Adda screens a range of Indian and international documentaries and feature films, and serves as a forum for filmmakers to screen and discuss their work and share ideas with the student community and film lovers. Culture Cafe is a space for dialogue on issues concerning media, culture and society. It features discussions, performances and other events.

In addition, the folks at SMCS organize a national-level students’ film festival called Cut.In and a national-level seminar for postgraduate students called Frames of Reference, every year. Students also come together to bring out Footnotes, the annual magazine.

TISS is also home to numerous forums and discussion groups, engaging with a cross-section of issues ranging from the development policies of the state to animal rights and environmental protection. Off campus, students are free to explore Mumbai, one of India’s most dynamic cities, which offers some great cultural (and culinary) experiences. The TISS campus sits in Deonar, which is well-connected to the city and its outskirts, offering a convenient retreat to nature when required.